Everything about Joaquin Murrieta is disputed. He was either the Mexican Robin Hood
or the El Dorado Robin Hood. He was either an infamous bandito or a Mexican patriot.
He was born in either Alamos or Trincheras, in either Sonora Mexico or Quillota Chile.

He was either descended from Cherokee ancestors who migrated to Chile in the late
18th century, or a noble Spanish landowner. He either sympathized with
Native Americans or with Mexicans.

An undisputed truth about Joaquin Murrieta is that he was born in 1829 and made his
way to California in 1850, seeking to mine for gold. Legend says that he, his wife and
his brother were attacked by American miners who envied his success and hated Mexicans.
Talk about sore losers, they not only raped his wife, they hanged his brother, and
horsewhipped the innocent Joaquin to a bloody pulp.

Murrieta tried to do the right thing and sought redress in the California courts, but was thwarted because Mexicans were prohibited from testifying against white men.

In the Sierra Nevadas, they rustled cattle and horses, robbed banks, and murdered no fewer than 19 men. California governor, John Bigler, got plenty mad about this and created the California State Rangers, led by Captain Love, who had the task of finding the gang for a paltry $150 per month. A bounty of $5,000 was offered for Murrieta. 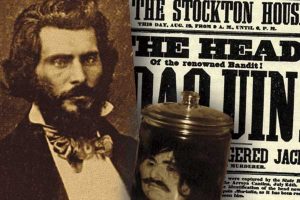 On July 25, 1853, an encounter between the Rangers and the gang ensued, killing
Murrieta himself, and Three Fingered Jack. The Rangers must’ve been pretty
bloodthirsty, because they stuck Garcia’s three-fingered hand and Joaquin Murrieta’s
head in a big jar filled with brandy to preserve their trophies. They displayed the jar over
Northern California, spectators paying one dollar each.
(Note: The jar was lost in the 1906 San Francisco earthquake.)

A year after the head and the hand event, legends about Murrieta began in earnest with
San Francisco newspapers and even a book telling the story which had unleashed the
fury of Five Joaquins and one Garcia in their quest for revenge.

His legendary life has been the subject of songs, novels, plays, and even the first Russian
rock opera. Murrieta’s story can also be seen in motion pictures like
The Robin Hood of El Dorado and The Mask of Zorro.

Not a bad legacy for a man about whom so many facts are disputed.